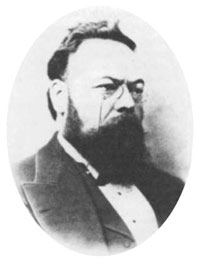 James Compton Burnett was born on July 10, 1840;near Salisbury, Wiltshire, and died April 2, 1901. He qualified with honours from an orthodox medical school in Vienna in 1869, and then from Glasgow in 1876. He was awarded the Gold Medal in Anatomy upon graduation. Alfred Hawkes converted him to homeopathy in 1872 (in Glasgow). In 1876 he took his MD degree.

As a young boy, James had a rare insight into the realities of life, and was possessed of a largeness of heart that extended a worldwide charity to all human interests. He was never deluded by the affectations and conventionalities of modern society, nor of the academies. While most medical men only see what they have been told to look for, and see it only in the light they have been told to see it, Dr. Burnett was able touse his own judgment to obtain information from Nature, at first hand. It was this independence and originality which gave him his unique power over complicated problems, and which made his patients feel that here was a man who was not content to form opinions only.

According to references, James was a dark-eyed, dreamy boy who grew rapidly. By the age of twenty-one he had attained the size and weight which he afterwards always maintained, both being much above the average. Brought up in the country, in early life he was left much to his own devices, and was always thoughtful beyond his years. He had an ordinary English education until he reached the age of sixteen, when he was sent to school in France, where he remained for a term of about three years. After this he travelled for several years, principally on the Continent, studying philology, the love of which in him amounted almost to a passion.

At one time he even had serious thoughts of devoting his life to that study. The effect of this is seen in the vivid literary style of which he was master. His unerring perception of the value of words is one of the many charms which make his books no less delightful reading than they are instructive and inspiring. Anatomy was the subject which fascinated him most, and he devoted to this science two years more of his time than the ordinary curriculum demanded. He prepared many valuable specimens for his professors during that term, and most of these are now preserved in the Pathological Museum of Vienna. Passing through a brilliant examination in anatomy, lasting one hour and a half, the professor shook hands with him, saying that he had never examined a student with so brilliant and thorough knowledge of anatomy.

During his medical profession, it was Dr. Richard Hughes’ book, A Manual of Pharmacodynamics, the first respected Homeopathic textbook published in English, which had recruited Burnett himself and practically the whole of Burnett’s generation of rising young homeopaths in Britain.

Burnett was one of the first to speak about vaccination triggering illness. This was discussed in his book, Vaccinosis, published in 1884.Along with other nosodes, he introduced the remedy Baccillinum. As a Homeopath Burnett was a productive writer and wrote twenty six books about many aspects of homeopathy. Some of his books are:

J.H. Clarke, Robert T. Cooper, and James Compton Burnett together formed the 'Cooper Club'. This regular meeting of leading British homeopaths was the source of many of the symptoms in Clarke's Dictionary of Materia Medica.

Clarke says of Burnett, "…during the last twenty years Burnett has been the most powerful, the most fruitful, and the most original force in homeopathy".