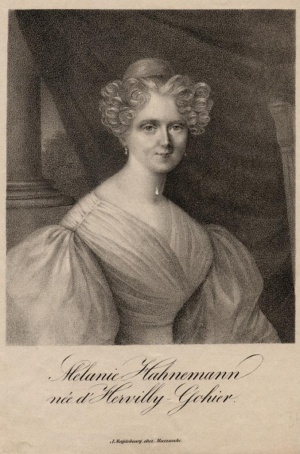 At October 7, 1834, MelanieHahnemann arrived in Coethen to be cured by Dr. Samuel Hahnemann, a German physician, whose reputation and method of treatment have also been known at the river Seine. Over an extended period, she suffered from painful ‚tics‘ in the lower right abdomen. Already n the year 1832, she had read the main work of her physician, the Organon, and she was fascinated by it. Being descended from impoverished aristocracy, she was well educated and she has been an acknowledged painter.

Starting from October 8, 1834, occasional entries in Hahnemann’s case records are missing. It is probable, that entries of her successful treatment were removed. During her treatment something happened, what she described as a ‚coup de foudre‘, a love at first sight. A few days later, Hahnemann proposed to her. She was 35, he was 80 years of age. The vehemence of their love was a big surprise for both. She wrote, „If I had realized earlier this incredible love, which erupted like a volcano, I would have hidden it. “ He wrote in a letter, „Never have I loved somebody as I love you; we will be in love for ever. “ – Her answer, “In my thoughts you will be my husband for ever, no other man will ever kiss my mouth. I put my trust in you and I swear eternal love and fidelity. “The initially warm relationship between her and his daughters had gone. They neglected this love.

After a short stay in her little apartment in Rue des Saint-Pères No. 26, the couple moved to a more spacious residence in Rue Madame No. 7. Melanie introduced her husband to Paris’ society. American actor Anna Cora Mowatt described the appearance of Hahnemann’s second wife in 1839, “The lady was a stylish appearing woman of more than average height and beautifully rounded figure.

Her features were not those of a beauty, but she could readily be described as handsome. … Her complexion was bright and colourless like alabaster. In her big blue eyes lies an expression of deep thoughts, rendering something ceremonial on her face, if it will not be neutralized by the benevolent smile of her lips.“ She was strikingly blond.
According to his correspondence, Melanie made her husband happy until the end. Since the end of the year 1836, they lived on a grand property.

Melanie increasingly got involved in working as secretary for her husband. In the end, writing was increasingly difficult for Hahnemann. After his death on July 2, 1843, she fell in terrible despair. She continued to run the clinic of her husband according to his instructions until 1848. She continued to keep his casebooks in which we can find handwritings of both. On May 27, 1878, she died after living a life including some chaotic events. She was buried aside the love of her life.