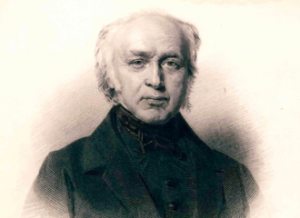 Clemens Maria Franz, Baron von Bœnninghausen was one of the most noteworthy of the early practitioners of Homœopathy. Born in the Netherlands on March 12, 1785, on the ancestral estate of Heringhaven in Overijssel, his lineage was traced through Westphalian and Austrian ancestry, one ancestor having been appointed as Field Marshal by Ferdinand II of Austria in 1632.

His early life was spent in the open, and he entered rather late upon his education, but after once starting, his progress was rapid. He graduated from the Dutch university at Gröningen with the degree of Doctor of Civil and Criminal Law on August 30, 1806, and thereafter for several years he filled increasingly influential and arduous positions at the court of Louis Napoleon, King of Holland, remaining in the Dutch Civil Service until the resignation of the king on July 1, 1810.

He then returned to his home and devoted himself to the sudy of agriculture and botany. He married in 1812 and removed to his hereditary estate of Darup. Through his interest in the development of agricultural resources he came in touch with the most prominent agriculturists of Germany, and he formed the first agricultural society in the western part of Germany. In 1816 he became President of the Provincial Court of Justice for Westphalia in Coesfield, which position he retained until 1822. About this time he became one of the Commissioners for the registration of lands and his constant travels gave him ample opportunity to study the Flora of Rhineland and Westphalia and he published a book on the subject: "Prodromus Florae Monasteriensis." In 1824 he became Director of the Botanical Gardens of Munster, retaining this position for several years, and received much distinction from his botanical writings.

In 1827 he suffered a derangement of health, which had hitherto been excellent. Two of the most celebrated physicians obtainable declared this to be purulent tuberculosis. His health continued to decline until the spring of 1828, when all hope of his recovery was given up. At this time he wrote a farewell letter to his close botanical friend, August Weihe, M. D., who was the first homeopathic physician in the province of Rhineland and Westphalia, though Bœnninghausen was ignorant of the fact, their whole correspondence having touched on botanical, not medical, subjects. Weihe was deeply moved by the news and answered Bœnninghausen's letter immediately, requesting a detailed account of his symptoms and expressing the hope that by means of the newly found curative method he might be able to save a friend whom he valued so highly. In response to the reply which Bœnninghausen sent to this letter, Weihe sent some Pulsatilla which Bœnninghausen took according to the directions, following also the course of advice which Weihe gave him regarding hygienic measures. Bœnninghausen's recovery was gradual but constant, so that by the end of the summer he was considered as cured.

This event bred in Bœnninghausen a firm belief in [Homeopathy] and he became an active missionary. He revived his former knowledge of medicine and began to practise. But he had no license to practise as a physician and for this reason he devoted himself to literary labors upon subjects connected with Homœopathy. Most of the systematic works written by Bœnninghausen concerning Homœopathy were published between 1828 and 1846. By this time Bœnninghausen's fame had spread to France, Holland and America, and he had gained many converts to the new doctrine of healing among physicians in these lands, by correspondence and literary efforts, which were extended in the effort of making the work of practicing homœopathy easier. At this time, you will remember, there was no short way to approach the study of homœopathy. No repertories, save a brief one in Latin by Samuel Hahnemann himself, had been published as an index to point the way to the indicated homœopathic remedy, and many hours must have been devoted to the study of remedy after remedy before the true picture was seen.

King Friedrich Wilhelm IV, under date of July 11, 1843, issued to Bœnninghausen a document empowering him to practice medicine without any restraint.

From 1830 Bœnninghausen was in close touch with Hahnemann, until the close of Hahnemann's life, and as long as Bœnninghausen lived he kept in close touch with all those practicing homœopathy. However, his literary work was much hampered by the permission to practice freely, and he did not publish his books as frequently after that event, although he spent much time at that labor. It is interesting to note that his earliest works found instant circulation among those interested in the new doctrine, and almost every practicing homœopath had Bœnninghausen's works in his library. Bœnninghausen's works in the order of their appearance are listed below.

After the proclamation empowering him to practice medicine, Bœnninghausen founded the society for homœopathic physicians in Westphalia, which flourished for many years under the interest which was roused in the homœopaths whom Bœnninghausen drew about him. He also was made member of nearly all the existing homœopathic societies; the Western Homœopathic Medical College, in Cleveland, in 1854, gave him an honorary diploma; the Emperor of France appointed him a Knight of the Legion of Honor on April 20, 1861.

Bœnninghausen was a close friend of Adolph Lippe, and also of Carroll Dunham. Both of these men expressed their appreciation of the work Bœnninghausen had accomplished, in Vol. 4 of the American Homœopathic Review.

Bœnninghausen for many years lived in Munster. He received patients daily from nine to two o'clock, from two to five he spent in walking about the suburbs and in the Botanical Gardens. He lived to attain the age of seventy-nine years, dying of apoplexy on January 26, 1864.

No one man, except Hahnemann, has left so deep an impress upon the literature of Homœopathy, or has exerted so great an influence in favour of the Homœopathy taught by Hahnemann, as Bœnninghausen. His Therapeutic Pocket Book, first published in1846, has been a guide to many, and other of the works of his scholarly pen have also been held in demand by the believers in pure Homœopathy. He devoted himself especially to presenting the Materia Medica so that the chief characteristics of each remedy might be thoroughly understood by the practitioner and his writings are mostly devoted to that object. The great literary work of his life was probably his editorship of the Aphorisms of Hippocrates with the Glosses of a Homœopathist. Of his seven sons the two eldest chose homœopathic medicine as their profession, which was a great joy to him. The elder of these sons practiced for a time in the neighborhood of his boyhood home, later going to Paris where he married the adopted daughter of Hahnemann's widow. He lived with Madame Hahnemann and her daughter, and had access to Hahnemann's library and manuscripts.